Rosetta comet rendezvous is a triumph for the European Space Agency 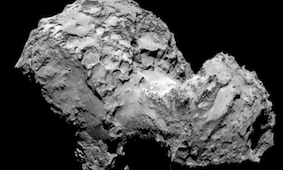 I have a new article on my Guardian blog, Across the Universe:

"Rosetta has arrived at Comet 67P/Churyumov-Gerasimenko. One of the most audacious space missions in decades, it is designed to reveal clues to the origins of the solar system, our home planet and life itself

This morning, a thruster burn brought Rosetta into “orbit” around its target comet, signalling the start of its main science phase. The spacecraft will now track comet 67P/Churyumov-Gerasimenko for a year, following it through its closest approach to the sun to monitor how the extra heating affects the icy surface.

Nothing about this mission is ordinary, and these are no ordinary orbits. The weirdly shaped comet, which some have likened to the shape of a rubber duck, does not produce enough gravity to fully hold the spacecraft. Instead, the flight team will “drive” the spacecraft in triangular-shaped orbits, gradually lowering the altitude from today’s 100km to around 30km. ..."