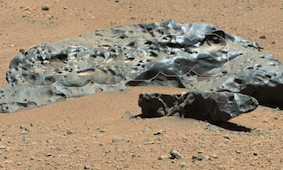 "The iron meteorite discovered by the Curiosity rover must once have been at the heart of a growing planet that was shattered aeons ago.

The meteorite is made of iron and about 2 metres long, which is about the width of the Nasa rover that found it. It is the first meteorite that Curiosity has found on Mars. Scientists have named it Lebanon – presumably because of its shape.

Meteorites are lumps of rock and metal that fall from space and impact the surface of a planet. They are time capsules, usually representing the shattered fragments of doomed worlds from the beginning of our solar system. ..."

you can read the full article here.