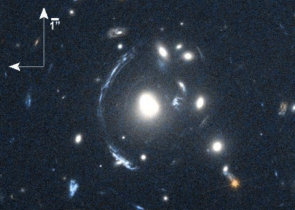 "New Herschel results have given us a remarkable insight into the internal dynamics of two young galaxies. Surprisingly, they have shown that just a few billion years after the Big Bang, some galaxies were rotating in a mature way, seemingly having completed the accumulation of their gas reservoirs.

When galaxies form, they accumulate mass by gravitationally attracting vast, external gas clouds. As the gas clouds enter the galaxy, they fall into haphazard orbits. These disordered paths cause turbulence in the host galaxies, which can drive star formation. ..."