New Scientist: Big bang breakthrough: The dark side of inflation 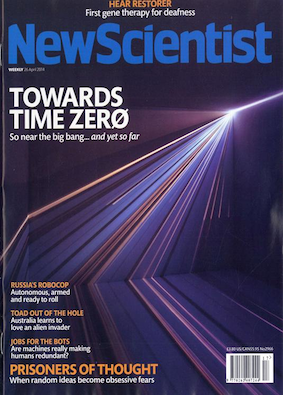 I have the cover story on New Scientist this week. It sprang from a dynamite email I received from John Peacock, Royal Observatory in Edinburgh, late on the day of the big bang announcement. It pointed out that there could be tragedy as well as triumph in the announcement, and that perhaps we would never know how the Universe truly began.

"The end of the beginning

Cosmology's big breakthrough is a triumph. But the joy is not unalloyed.

SUITABLE clients at Milliways, Douglas Adams's Restaurant at the End of the Universe, would have experienced six impossible things before breakfast. In the past decade or so, cosmologists have looked like they were halfway there.

Strike one: dark matter. Galaxies are whirling round faster than normal gravity alone can explain, so 80 per cent plus of the universe's matter is in a form neither we nor, so far, our detectors can see.

Strike two: dark energy. Contrary to all expectations, the universe's expansion is apparently accelerating, so the inwards gravitational tug of both normal and dark matter is being trumped by the effect of another substance so exotic no one knows for certain what it might be.

Strike three: inflation. After all that, the universe still looks rather less crinkly than we would expect, so it must have been smoothed out by a spontaneous faster-than-light expansion in the earliest phase of its existence, which then just stopped.

Extraordinary claims, requiring extraordinary evidence. So you could almost feel the collective sigh of relief last month when the team running the BICEP2 telescope, situated at the South Pole, announced that they had seen a sign of one of this terrible trio. Distinctive patterns of light polarisation in the cosmic microwave background (CMB) radiation were in fact two for the price of one. They represented an apparently unmistakable signature of inflation, but also provided indirect evidence for the existence of gravitational waves from the same era – another theoretically predicted phenomenon that has so far shied away from the limelight.

If the result is confirmed, it is heady stuff. Cosmologists will be able to begin whittling down a forest of ideas about how inflation might have happened, and close in on an understanding of the first microscopic moments of the universe's history.

But there is sobriety amid the popping of champagne corks. Besides the question of that all-important confirmation, there are wider-ranging considerations. "Although this is a historic advance, it is also a limit," says John Peacock, a cosmologist at the Royal Observatory in Edinburgh, UK. "We have now seen as far back in time as it is possible to see, and it is not to the very beginning." We may now know more about the moments following the big bang than ever – at the price of never knowing any more about the event itself. ..."

You can read the full story here (a registration is required).