Across the Universe: Searching for life on Mars: where should the ExoMars rover land? 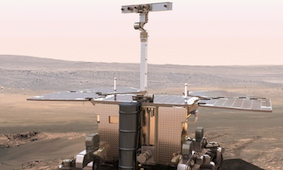 I have a new post on my Guardian blog. This one is not written by me but was kindly offered by planetary scientist, Peter Grindrod, to whom I am very grateful.

"On Wednesday, the European Space Agency starts considering potential landing sites on Mars for its 2018 ExoMars mission. Dr Peter Grindrod at Birkbeck, University of London, is one of the experts tasked with this job. He kindly contributed this guest blog

If you had to pick just one place to find life on Mars, where would you go?

In the 1970s, John Guest worked on the Nasa Viking mission to Mars. Twin orbiters, twin landers – nobody builds missions like that these days. As a geologist, John helped to decide where one of the landers would touch down.

John told me how he and his friend Ron Greeley only had a couple of days’ worth of images from the orbiters, at a frighteningly low-resolution by today’s standards. They had to choose a landing site that wouldn’t leave the landers in pieces and would still be scientifically interesting. I thought that the pressure and responsibility of that decision must have been massive. John seemed nonplussed by my concern.

I remembered this story because the European Space Agency has recently asked the same question.

But this is no longer the Mars that John and Ron knew with Viking. We no longer have to rely on just a handful of low-resolution images and a rushed decision. Instead we have hundreds of terabytes of data at our fingertips to call upon in the search. ..."