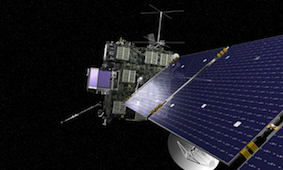 Today was the day that the €1 billion spacecraft Rosetta woke up from 31 months in hibernation. I spent the day with at ESA's control centre in Darmstadt, Germany. I was keeping a live blog updated for my Across the Universe blog for The Guardian all day, and I also wrote some reports for New Scientist.

Below are the stories in chronological order, with the oldest at the top.

"With hours to go until we know whether the first space mission designed to land on a comet can succeed, tensions are running high at the European Space Operations Centre, Darmstadt – the European Space Agency's equivalent of NASA's famous mission control.

I am spending the day here with the scientists and engineers at the heart of the comet-chasing Rosetta mission, and so far, it's been all about the wait. "I'm not calm, I'm not excited, I'm somewhere in between," says Roberto Porta, a member of the spacecraft operations team. ..." Read full article here.

Guardian: Rosetta comet-chasing spacecraft wakes up – as it happened

This was a live blog that ran throughout the day. It tells the story as it happened on the day. You may have to read from the bottom up. read the blog here.

When the signal arrived I wrote this: 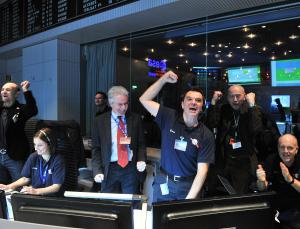 New Scientist: Up and at 'em: Rosetta craft gaining on target comet

"Nothing for 31 months. Then a half-hour delay that drove everyone nearly mad. Finally, a triumphant signal that confirms that the comet-chaser Rosetta is alive and well, 800 million kilometres from Earth.

I filed a report to The Guardian as well. It was published online that night, and made it to the front cover of the print edition on 21st:

"There was a moment of silence, and then the room erupted. Two hundred scientists, engineers and journalists threw their arms in the air, cheered, and bear-hugged their nearest neighbours, whether they knew them or not.

Many had waited a decade for this. In 2004, the European Space Agency launched the Rosetta probe on an audacious mission to chase down a comet and place a robot on its surface. For nearly three years Rosetta had been hurtling through space in a state of hibernation. On Monday, it awoke. ..."

The day after I was still in Darmstadt. I had arranged a later flight home so that I could continue coverage if there had been a significant delay in receiving the signal. It allowed me to track down the reason for the signal's delay:

"Why was the comet-chasing Rosetta spacecraft 18 nail-biting minutes late phoning home yesterday? Because a mystery computer glitch forced it to wake up a second time.

Rosetta's on-board alarm clock went off at 1000 GMT as planned but, like many a tired soul, instead of waking up, the craft hit the snooze button – and woke fully only after a second reboot."

Many thanks to everyone at ESA who gave me so much access, and allowed me to work so easily. It was a great day, and one I won't forget.