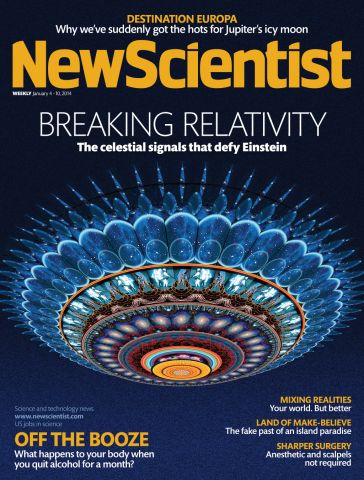 I'm pleased to say have the cover story on New Scientist's first issue of the year. For a long time, I have tried to understand the nature of the spacetime continuum. It exists as a mathematical concept but turning that into a physical reality is much more difficult. New Scientist allowed me to explore the topic for this article and what I discovered was that no one knows what the true nature of the spacetime continuum. If we find that out, we may just be able to take our next big leap beyond Einstein. Here's a tease of the article:

WE LIVE in an invisible landscape: a landscape that, although we cannot perceive it directly, determines everything that we see and do. Every object there is, from a planet orbiting the sun to a rocket coasting to the moon or a pencil dropped carelessly on the floor, follows its imperceptible contours. We battle against them each time we labour up a hill or staircase.

This is the landscape of space-time: the underlying fabric of the physical universe, perhaps of reality itself. Although we don't see its ups and downs, we feel them as the force we call gravity. Developed by the physicist Hermann Minkowski in the 20th century, and used by Albert ... "

You can read the full story in issue 2950, or online here (sign-in required).