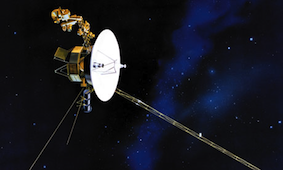 I have a new post on the Guardian's Across the Universe about Voyager 1 leaving the magnetic field of the Sun, defining the edge of the solar system:

Voyager 1 has left the building, by which I mean the solar system. A historic milestone in exploration has been reached and the hero is a spacecraft

It's official. Voyager 1 has left the solar system. While there will be little immediate benefit from this feat, it does represent a historic milestone of exploration.

Voyager 1's achievement is every bit as important as Roald Amundsen's party reaching the South Pole on 14 December 1911, or Edmund Hillary and Tenzing Norgay conquering Everest on 29 May 1953. The difference is that there is no human inside Voyager.