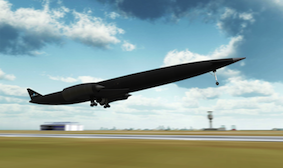 Imagine taking off from a runway like a normal aeroplane but flying so high and so fast that when you unclip your seatbelt, you float around the cabin. Look out of the windows: on one side is the inky blackness of deep space, while on the other is the electric blue of your home planet, Earth.

This is no joyride for a few brief minutes of space-tourism weightlessness. Instead you are three, five or even 10 times higher than those little hops. In front of you is your destination: a space station. Perhaps it is a hotel or a place of work. You are in low earth orbit - and you've got there in far less time than it takes for a transatlantic flight.

This is the promise of the spaceplane, and it took a step closer to reality yesterday. UK Minister for Universities and Science David Willetts confirmed the government's £60m investment in Reaction Engines Ltd.

Read the rest of the story here