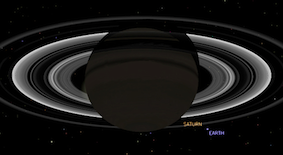 I have a new story over on the Guardian's Across the Universe blog:

Nasa's Cassini spacecraft will take an image of Earth from 1.44bn kilometres away. From there, our planet will look like the expected images of alien earths around other stars

Nasa takes pictures of Earth all the time – but not like this. The Cassini spacecraft is in orbit around Saturn, and so is currently 1.44bn kilometres away. From that distance, Earth is only going to appear as a pixel or two across.
The image, which will be taken on 19 July at around 10:30pm BST, will show our whole, living breathing world of six billion inhabitants, as a single point of light.

It is expected that the Earth will look like a "pale, blue dot". This was the phrase used to describe an image of Earth taken in 1990 from even further away. The Voyager 1 spacecraft was 6bn kilometres away, roughly the distance to Pluto's orbit, when it took pictures of most of the planets in the solar system.

Because of Earth's predominant oceans, the planet appeared as a pale blue dot but was difficult to pick out on the final image.

This attempt should provide something more photogenic. The great ringed world of Saturn will be eclipsing the Sun so its rings will be visible but the great bulk of the planet itself will be in silhouette. Earth will appear to the bottom right of the ring system.