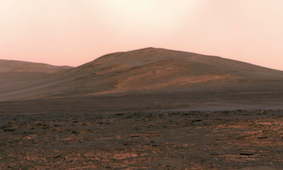 Nasa's Opportunity rover is celebrating 10 years on Mars by finding its best evidence yet: that the planet was once habitable

Opportunity has made one of its greatest scientific discoveries so far. Clay minerals in a rock called Esperance clearly indicate that neutral water flowed across the rock some time in the first billion years of its existence.

The rock was found near Endurance Crater, and took seven attempts to analyse because it was partially covered in Martian dust…