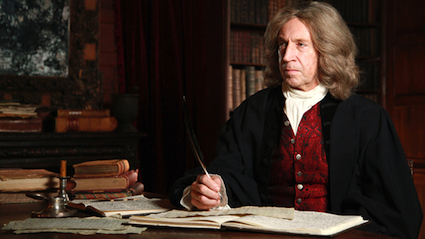 “Recluse. Obsessive. Heretic. Isaac Newton is now considered to be the greatest genius of all-time, a great rationalist who laid the foundations for many of the scientific and mathematical breakthroughs that shape the modern world.

But this 60-minute biography, part of the BBC’s Genius Of Invention season, reveals a much more complex figure by interviewing experts and delving into his own writings and those of his contemporaries. Newton emerges as an often divisive figure, one who lived a largely solitary life. In the secrecy of his study and laboratory, we find that he also delved into heretical religion, alchemy and the occult.

Sir Isaac Newton transformed how we understand the universe. By the age of 21, he had rejected 2,000 years of scientific orthodoxy to develop his own insights through a relentless - and often dangerous – series of experiments. From his obsessions with light and gravity, to alchemy and biblical texts, Newton held no truth – or text – so sacred that it could not be questioned. His work put him at odds with fellow scientists and led to dark periods of isolation throughout his life.

But his genius could not be denied: he rose through the scientific ranks to become the President of the Royal Society and one of the most influential scientists in the world. His heretical religious views and his obsession with alchemy remained a closely guarded secret in his lifetime. After his death, his unpublished alchemical research and documents relating to his heretical views were buried to protect his reputation. They remained largely hidden until 1936 when they were purchased by the economist John Maynard Keynes. Keynes revealed that Newton was a much more complex man than history had allowed. The programme concludes that Newton’s secret obsession with alchemy helped him to achieve some of his greatest scientific insights.”