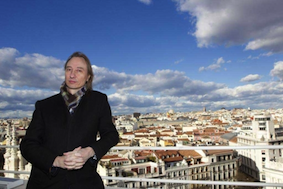 The astrophysicist is very pleased about the construction of large telescopes such as ALMA, which just opened officially in Chile : "The era of giant telescopes has already started and we have the potential to revolutionise what we think we know about the universe. The only way to progress is to look at nature in a different way and more closely than we have done so far.” He hopes that machines like the Large Hadron Collider (LHC) or giant telescopes such as ALMA and the future EELT (European Extremely Large Telescope) will change how we think about the way the universe works. “My great hope for the next decade is to have a revolution in our understanding of gravity, because we still do not fully understand how it behaves. Also about dark matter; we think it's there but we cannot understand its properties.” "
A search for life on other planets
For Clark, "searching for exoplanets is one of the most exciting areas of science because they will give us information about life on Earth. We have located nearly a thousand, but none is exactly like Earth, though some appear similar. In ten years we could be looking for life on planets beyond our solar system. The intention and ambition of the European Space Agency (ESA) to send missions already exists. "
"Within a decade we could be looking for life on planets beyond our Solar System"

He also considers "extremely important" the work that the rover 'Curiosity' is doing on Mars: "We want to know whether Mars ever supported life. Potentially 'Curiosity' can offer information about life on Earth," he says. The scientist said that the ExoMars mission, that ESA and Russia hope to send to Mars in 2018, will analyse samples of soil and subsoil with the goal of finding chemicals that could prove that life once existed on Mars: "'Curiosity' attempts to find out whether Mars could have been inhabited. 'ExoMars' will seek for evidence to prove it," he concludes.
With respect to future manned mission to the Red Planet, Clark believes that "It is possible to send people to Mars without returning to the Moon to practice.  It’s a matter of budget and the return we would get from that mission, both scientifically and culturally. It is cheaper to send robots to Mars but a human would be able to see and recognize things that a robot cannot," he says. However, "Even though many people are talking about the possibility of going to Mars and millionaires are interested in this mission, I think it is still very difficult. Still very dangerous, but I think it's possible," he says.
Cuts in science
Budget cuts in science are threatening Spain's participation in the EELT. With respect to cuts in research in Spain, he said: "I think it's very easy to get off science projects when money is a problem. But I think investing in them and trying to understand the world is critical to the morale of the people, because it gives them hope for the future and reminds them that there is more to life than everyday problems. "
The scientist said he was "happy" with the commitment that the British Government is making to science: "The space sector was one of the few industries that grew during the economic crisis (7%). This convinced the Government that is extraordinarily profitable to invest in basic science and space technology." Clark points out that an interest in science careers also grew tremendously in his country following the crisis: "Before, you entered the world of finance to get rich quickly. Now that things have changed, why not do something that could enrich on a personal level? Science is a way to better living through, for example, technology or medicine," he reflects.
"Britain has understood that it is very profitable to invest in science. Space was one of the few sectors that grew during the crisis"

The scientist says that "the meteorite that fell in Russia a few weeks ago causing hundreds of injuries has shown that there is still much work to do to feel safe from the threat of an asteroid. " He explains that the research of recent years shows there is no short-term risk at present from an asteroid the size of one that killed the dinosaurs: "The space telescopes that watch are more and more sensitive and able to detect smaller and smaller asteroids. The Russian meteorite was about 30 metres across and the ability to detect it in advance was very low. But in the future, maybe in the next five years, we will be able to detect objects as small as about 100 metres," he says. Meanwhile, scientists continue to design systems to deflect asteroids that might pose a risk in the future.
Science and religion
Some of his colleagues, such as astrophysicist Stephen Hawking and evolutionary biologist Richard Dawkins, have reopened the debate on science and religion. Clark believes that both are compatible: "I am not a Christian or religious person. Nevertheless, I have very good friends who believe passionately. And that's fine. Because science can never provide answers to religious questions nor will it demonstrate the existence or non-existence of God. Similarly, religion cannot answer scientific questions. A religious person cannot prove the existence of God nor does he need to. But as scientists we have to prove everything that we believe. That is the big difference," he reflects.
Clark believes that public debate on these issues "is part of the process. If the debate offers audiences a new perspective, that seems positive. But I think that any confrontation in which one tries merely to denounce the position of the other person is not helpful at all. I believe in tolerance and rationality," he states.
Disseminate Science
The astrophysicist asserts that the stars have interested him since childhood. "For me it was always obvious that I would become an astronomer," he says. Over time, his interest in storytelling also grew: "Telling stories about astronomy and the universe has become my profession."
"Science can never prove the existence or non-existence of God"

Clark is the author of the successful trilogy of books 'The Sky's Dark Labyrinth' , which chronicle the life and discoveries of great scientists like Galileo Galilei, Johannes Kepler, Isaac Newton, and which have achieved what he set out to do: to translate complex scientific language to the general public. "Many people are afraid of science books because they are written in technical language, so I think these books are a very suitable vehicle to talk about science to non-scientists."
Albert Einstein is the star of 'The Day Without Yesterday' (The day without yesterday), the last book of the trilogy that just went on sale in the UK. Currently, there are no plans for the trilogy to be published in Spain. "Unlike the other two books, which introduced some fictional characters to fill the gaps in the historical record, the documentation for this era was so good that it wasn’t necessary."