Asteroid mining is back in fashion (unlike the tank top) 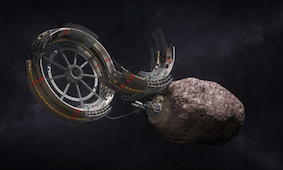 A new company called Deep Space Industries has put itself in a race with Planetary Resources, Inc. to mine an asteroid commercially by 2020

I have a new post over at my Across the Universe blog for The Guardian.

"Until recently, the last time people talked about mining asteroids they were probably wearing tank tops and corduroy flares. It was all part of the Apollo-era optimism about living and working in space - and it collapsed along with Nasa's budget some time in the 1970s. Now asteroid mining, though thankfully not the tank top, is back in fashion. But can it really work?
A new company called Deep Space Industries has announced ambitious plans to begin prospecting and mine near-Earth asteroids by 2020.
DSI plan to use small satellites known as Fireflies to prospect near-Earth asteroids in 2015, and Dragonflies, which will launch in 2016 and take 3-5 years to capture samples from asteroids. ..."
You can read the full article here.