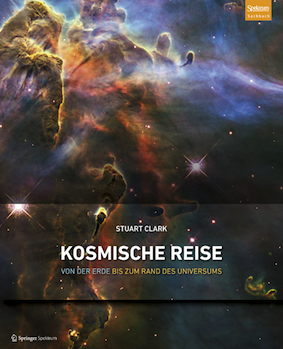 My beautifully produced pictorial guide to the universe, Voyager: 101 Wonders Between Earth and the Edge of the Cosmos, is to be reissued in the UK this November, and published for the first time in Germany in September. In the UK, it will be published by Atlantic Books. In Germany, it will be called Kosmische Reise and be published by Springer Spektrum.

From page 22 of the Atlantic catalogue:

"A fantastic voyage across 276 billion trillion miles of space and 13.5 billion years of time, told through more than 300 of the most dramatic astronomical images ever captured.
You are about to embark on a journey that will take you to the edge of the universe and the beginning of time. You will cross 46.5 billion light years of space, exploring 101 celestial wonders ranging from comets to quasars. You will encounter grandeur on an astonishing scale, beauty in the most unexpected places, and the most shocking natural violence. You will see sand dunes snaking across the northern plains of Mars, you will soar above alien cloudscapes of fluorescing gases, and burrow into the secret nests of new stars hidden within. You will watch hypergiant stars tear themselves to pieces and witness the insatiable appetite of supermassive black holes in a grand tour of space that offers an unrivalled portrait of our cosmic habitat."