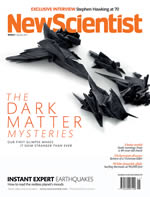 I'm thrilled to have New Scientist's first cover story of 2012. The article is about the seismic shift that is taking place in our understanding of dark matter.  There is no getting away from the fact that the more observations we take, the less satisfactory our traditional models of dark matter seem to become. This article explores the way astronomers and particle physicists are feeling about this, and what the possible dark matter detections of last year really mean.

My research began back in the late summer 2011. New Scientist sent me to the Topics in Astroparticle and Underground Physics conference in Munich. I filed two news stories for them, one about antimatter and the other about dark matter.

I came away from the conference convinced that there was a deeper story, so began to follow up all the new things I had learned from the week. This article is the result.  The story is not online yet, but is available in the latest issue of New Scientist, which is dated 7 January and should be in shops now.

Enjoy it!  And look forward to another year of amazing discoveries.