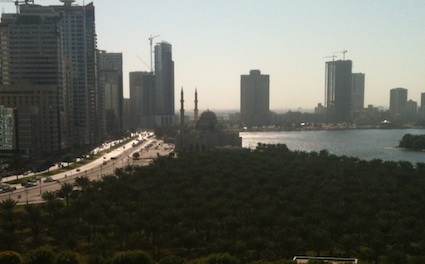 The bookfair is overrun today.  The noise hits you the moment you walk into the glass atrium of the airy exhibition halls.  As my new friend, the poet Yahia Lababidi, says later, “It was like a hive humming with bees. Only instead of bees it was little girls.”

Today is girls’ schools day at the Sharjah International Book Fair and they are here in force.  Against this vibrant backdrop, I meet Michael Rothenberg, founder of the 100 Thousand Poets for Change movement.

He explains to me that his project is uniting people from all over the world by giving them a platform to share their voices with others.  While others may talk about their wishes to unite the world, Michael has found a way to do it.  Okay, the numbers of people taking part are small compared to the global population but it’s a strong stitch in the wished-for global fabric.

The participants come from different backgrounds and cultures, political standpoints and religions, yet all can unite in a common goal of using the written word.

It’s a cliche to say that writing is about finding truth, yet it’s a cliche because there’s some – well – truth in it.  A human response or a feeling that resonates widely with others can be that essential grain.  Or perhaps, it is a new empathic way of looking at something.

Particularly for a poet, the challenge can be to distill a feeling, or an event, or a reaction, into its more potent, compact form.

I explain that I feel science is similar...

Science is about looking for irreducible truths in nature that can be expressed in compact mathematical form.  But that unfortunately, the never ending professionalisation of science in universities, and the squeeze of funding, has obscured the joy of it and in some cases, taken the heart out of it.

Science is not about pretending that you have all the answers.  It’s about being a seeker and most importantly, it’s about embracing the mysteries – after all that’s where a scientist is supposed to be working, where things don’t make sense and the wonder of nature is abundantly apparent.

Yahia joins us as I’m telling Michael of the 1000 pages of calculations that survive of Johannes Kepler’s epic struggle to understand the orbit of Mars. At the end of this Herculean task, Kepler distilled the motion of Mars to just three lines of maths. These were a truth and not just for Mars.

Kepler’s three laws of planetary motion, as they are now known, applied not just to Mars, but to all the other planets in the solar system, to all the moons around those planets, and subsequently to all 700 planets that have been discovered around other stars during the last 20 years. Kepler found a beautiful truth that he distilled for us all, just as a portraitist leaves a masterwork for later generations.

“You know, a poet may have to write a thousand poems in order to write just one that has real meaning,” says Yahia.

And a thousand school girls may be needed at a book fair to trigger the determination to become a writer in just one of them.  But judging by the enthusiasm washing around me today, those other 999 stand a very good chance of becoming at least readers.

Later that night, as Indian Ghazal music echoes in the plaza outside, I spot a number of people leaving the book fair with supermarket trolleys full of reading material.

As Yahia says, “We’re all hostages to beauty.”  The only thing that differs is where we find beauty.