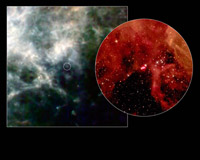 ESA’s Herschel space observatory has discovered that titanic stellar explosions can be excellent dust factories. In space, the dust mixes with gas to become the raw material for new stars, planets and, ultimately, life. This discovery may solve a mystery of the early Universe.

The discovery was made while Herschel was charting emission from cold dust in the Large Magellanic Cloud, a small galaxy near to the Milky Way. It is the perfect observatory for the job because cold dust radiates far-infrared light, the wavelengths Herschel is designed to detect.

Herschel saw a spot of light at the location of supernova 1987A, an exploding star first seen from Earth in February 1987, and the closest known supernova in the past 400 years. Since then, astronomers have been studying the remains of the explosion as its blast wave expands into its surroundings. Herschel’s images are the first clear-cut far-infrared observations of SN1987A. They reveal cold dust grains at about –250ºC, emitting more than 200 times the Sun’s energy.

“The supernova remnant was much brighter at infrared wavelengths than we were expecting,” says Mikako Matsuura, University College London, who is the lead author on the paper detailing these results.

The remnant’s brightness was used to estimate the amount of dust. Surprisingly, there turned out to be about a thousand times more dust than astronomers had thought a supernova was capable of producing – enough to make 200 000 planets the size of Earth.

However, it is not fully understood where this dust comes from, especially in the distant and thus young Universe, but now we have an indication. The many old red giant stars in today’s Universe are thought to be the major dust producers, with the grains condensing like soot in a chimney as warm gases flow away from the star. However, there were no such stars in the early Universe – yet we know there was already dust.

Now Herschel has shown that supernovas can produce enormous amounts of dust: the astronomers speculate that the dust condenses from the gaseous debris as it expands from the explosion and cools. Since there were plenty of supernovas in the young Universe, this could help to explain the origin of dust seen at those times. “These observations provide the first direct evidence that supernovas can produce the dust seen in young galaxies at great distance,” says Göran Pilbratt, ESA’s Herschel Project Scientist. “It is a significant result and shows yet again the value of opening a unique window onto the Universe..”

The story was originally published by ESA here.