Vote for the Most Inspiring Astronomical Photo of the Year

The time has come to vote! Thank you for all your suggestions; many have made it onto the shortlist. If looking at these images teaches me anything, it is that the study of the heavens enriches us culturally as well as scientifically. Each one of these images is a work of art. You do not need to understand what you are looking at, to be moved by it.

Perhaps it is the colours or the intricacy that capture you, making you spend time looking at the photo. Perhaps you experience a moment of “What on Earth (or beyond) is that?” Great art is supposed to make you react. It was this belief in the artistic power of astronomical images that led me to write my new book Voyager: 101 Wonders between Earth and the Edge of the Cosmos. The editor and I began the process by clicking through image after image, saying instantly “yes” or “no”. If we both said “yes”, it went in. We figured that each image had to have that instantaneous ‘wow’ factor to engage the browsing public. I think each of the images on this shortlist has that too.

So, here they are. Ten stunning photographs of the cosmos that did not exist 12 months ago. Don’t think about your decision too much – just go with your gut instinct. Read down the shortlist and then vote at the bottom of the post. If you can’t see the images, click the ‘read more’ button below the tags.

You’ll have until Friday 31st to vote. Please encourage your Twitter followers, Facebook fans and blog readers to vote as well! Also, feel free to post in the comments why you voted as you did; I’d love to hear your reactions. Let’s have some fun with it and if it works well, we can do it all again next year! Season’s greetings to you all.

These images have all been released for the first time during 2010 from publicly funded observatories, space agencies and organisations.

Melas Chasma sinks 9 km below the surrounding plains making it one of the lowest depressions on Mars. This image covers 200 x 100 km and covers an area of roughly 20 000 sq km, which is about the size of Slovenia. The original can be found here including a stunning 3D version that requires special glasses to see. Thanks to @netdaw for the suggestion. 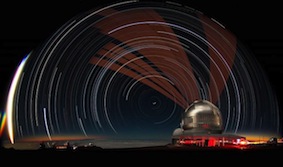 This is art coming out of science. It is a long duration photograph that captures the rotation of the Earth and the sweep of a laser beam that the Gemini Telescope uses to correct for atmospheric distortions when imaging the night sky. The original can be found here. 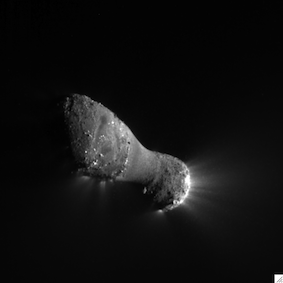 A glorious picture of Comet Hartley 2. The comet's icy body is roughly 2 km and jets of evaporating ice can be seen streaming outwards into space. The ‘neck’ of Hartley 2 is just 0.4 km in diameter. The original can be found here. Thanks to @NickAstronomer for the suggestion. 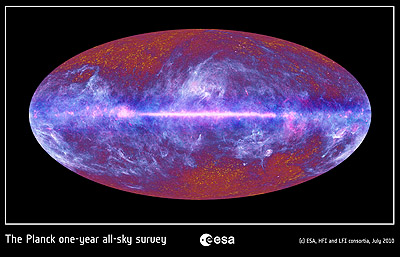 This extraordinary image of the Universe combines the very first light – the microwave background radiation released more than 13 billion years ago – with some of the youngest, in the form of microwaves from nearby dust clouds in the Milky Way. The original can be found here. 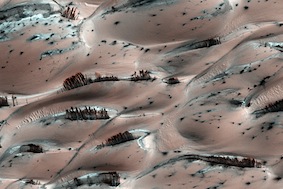 Weird Dunescape on Mars
Released on 6/1/2010. Credit: NASA/JPL/University of Arizona

The year got off to a spectacular start with this shot of weird-looking sand dunes on Mars. The pale colour comes from carbon dioxide frost and the dark streaks are dust dislodged by the thaw. Every time I show it in lectures, it generates a gasp of astonishment. The original can be found here. 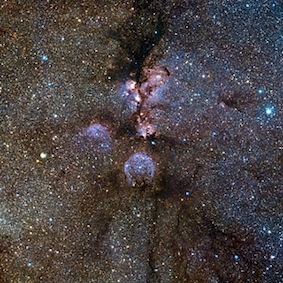 The density of stars in this image staggers me – like diamond dust scattered across the sky. We used to see images like this in science fiction films, now we see them in reality – and that makes them all the more beautiful. The original can be found here. 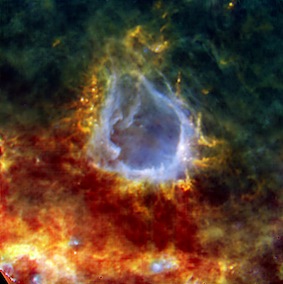 This is a giant bubble blown into a cloud of gas by a newly formed massive star. The colours in this one are representative as it is an infrared image and there is something organic and beautiful about the shape of the bubble. The original can be found here. 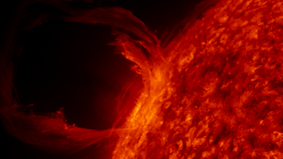 Awesome image of the Sun’s awesome power. A giant filament of hot gas launches into space from the solar surface. Just because there is not much solar activity at the moment doesn’t mean that there aren’t amazing things to see. The original can be found here along with a fantastic movie showing the entire eruption. Thanks to @TaviGreiner for the suggestion. 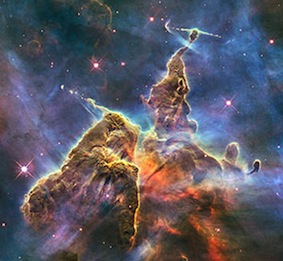 The intricate details of star formation are revealed in this image of the Carina Nebula, dubbed the ‘Mystic Mountains’. The original can be found here. 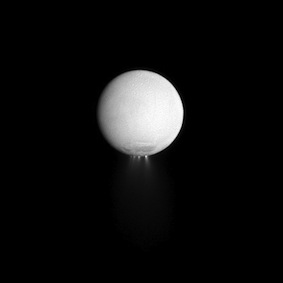 Enceladus and its Plumes
Released on 1/10/10. Credit: NASA/JPL/Space Science Institute

At least four plumes of water ice are spewing from the southern polar region of Saturn's moon Enceladus. The moon itself is being illuminated by light reflecting off Saturn. You can see the original here. Thanks to Max Alexander for this suggestion.