Solemn news today from Prague: the body of the great naked-eye astronomer Tycho Brahe has been exhumed so that new investigations into his death can be performed.  Tycho has been resting in the Church of Our Lady Before Tyn near Prague's Old Town Square, beneath a giant black slab on which his name is carved in gold.  He was buried there in 1601 but has been exhumed once before, in 1901.

Jens Vellev, a professor of medieval archaeology at Aarhus University, Denmark, is leading the team of scientists from Denmark and the Czech Republic who began work on opening the tomb in the church today.

Talking to The Associated Press, Vellev said he decided nine years ago to seek permission from church and Prague authorities to open the tomb again because there had been no proper archaeological report of the 1901 exhumation and he hoped to gather better samples of moustache, hair and bones that could be analysed by contemporary technologies.

Tycho is close to my heart as he is a central character in my forthcoming novel The Sky’s Dark Labyrinth, the first volume in a series that dramatises the history of astronomy.  I admit to having ambiguous feelings about the exhumation but I guess an architect of modern science would not mind his remains being scientifically analysed centuries later - and Tycho certainly liked to be in the limelight.

Apart from his astronomical achievements, he is famous for his metal nose.  It replaced the bridge of his real nose, which was lost at university in a duel over mathematics – can you imagine today’s students fighting over who was the best mathematician? 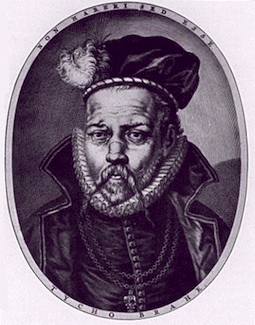 Part of the new investigation Vellev hopes to carry out involves checking to see whether Tycho was poisoned, perhaps by his great rival/assistant Johannes Kepler.  According to history, Tycho died of a bladder infection but the 1901 exhumation indicated higher than usual concentrations of mercury in his body.  The whole body is not being taken away; Vellev has until Thursday this week to obtain the samples of hair and bone he needs for his work.  On Friday, Tycho is to be reburied after a special mass.

Click on the ‘read more’ button below the tags to have a sneak preview of the moment in The Sky’s Dark Labyrinth when an exhausted Kepler meets Tycho for the first time.  And check back on Friday, when I’ll be posting another preview in honour of Tycho Brahe.

“ ... By the time the castle gates hove into view, Kepler was more than a dozen lengths behind, his head whirling from the exhausting ride.  When he finally reached the courtyard, Tengnagel had already dismounted and was strutting about, leaving the stable hands to calm the stallion.

Kepler drew his horse to a stop and slumped forward along its neck.  His heart threatened to burst from exertion and despite the autumnal chill he was sweating from every pore.  He slid to the ground, his knees buckling upon contact.

A gruff voice rang out across the yard. “What have you done to our guest?”

“I cannot be held responsible if he is unused to our pace of life, sire,” replied Tengnagel.

“I asked you to escort him here as an honoured guest, not ride him into the ground, you fool.”

Tengnagel flinched, incredulity written on his face.  Then, throwing his riding gloves into the mud, he stamped inside.

“What does my daughter see in him?” the gruff voice muttered.

Kepler rubbed his watering eyes and brought them to bear on the source of the voice.  A mockery of a human face looked back. It wore a hat reminiscent of a Turkish cupola. Beneath it, two rheumy eyes of hazel gazed unblinkingly from deep sockets and a tightly rolled moustache hung limply about the mouth.  There were gaps among the teeth and those that remained were stained saffron yellow.  But that was not the worst of it.  The bridge of the nose had been replaced by a cylinder of rose-coloured metal and gobs of some thick unguent clung to the margins where angry flesh met the hideous prosthetic.

Was this Tycho Brahe?

The face spoke.  “I must apologise, more than I had intended, for not escorting you from Prague in person.”

He was so old.  The picture in the frontispiece of his book painted him as a young noble, strapping and brave, not as this ugly palimpsest.  Disappointment mingled with Kepler’s physical discomfort and he thought for a moment he might vomit.  Gulping down the nausea, he said, “I am here now.”

A flicker passed across the old man’s wide face.

I should have been gracious, thought Kepler, his head pounding. ...”

Although no one could have known it, the meeting between these two men set the scene for a tempestuous eighteen-month-long association that changed the world by opening the door to the modern world of science.  This key turning point in history is dramatised in The Sky’s Dark Labyrinth, which will be published in April 2011 in the UK by Polygon Books.  The book will also be released in Canada, South Korea, Japan and Greece.  More foreign editions are expected, so check back often!