The sun sends a charged cloud hurtling our way 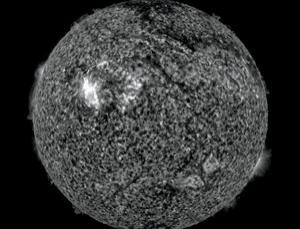 The long solar slumber appears to be coming to an end. I have a new piece in New Scientist today, accompanied by a very cool video from the Solar Dynamics Observatory of the complex eruption taking place.

“ An unusually complex magnetic eruption on the sun has flung a large cloud of electrically charged particles towards Earth. When the cloud hits, which could be anytime now, it could spark aurorae in the skies around the poles and pose a threat to satellites – though probably not a particularly severe one. ...”
Read the full story here.