What’s Wrong with the Sun? 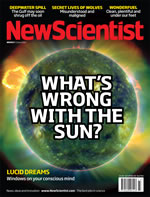 I have the cover story on New Scientist this week.

“SUNSPOTS come and go, but recently they have mostly gone. For centuries, astronomers have recorded when these dark blemishes on the solar surface emerge, only for them to fade away again after a few days, weeks or months. Thanks to their efforts, we know that sunspot numbers ebb and flow in cycles lasting about 11 years.

But for the past two years, the sunspots have mostly been missing. Their absence, the most prolonged for nearly a hundred years, has taken even seasoned sun watchers by surprise. "This is solar behaviour we haven't seen in living memory," says David Hathaway, a physicist at NASA's Marshall Space Flight Center in Huntsville, Alabama.

The sun is under scrutiny as never before thanks to an armada of space telescopes. The results they beam back are portraying our nearest star, and its influence on Earth, in a new light. Sunspots and other clues indicate that ... ”

To read the full story, click here (the story is available free for a limited time, after which a subscription may be required).