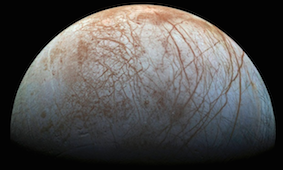 "Jupiter’s icy moon Europa may harbour extraterrestrial life. Nasa has announced a mission to go, but Esa will get there first.

Europa is a tantalising place orbiting the giant planet of Jupiter. Extraordinary images from the twin Voyager spacecraft in 1979 showed that Europa’s surface was cracked in places, with what looked like ice floes in others.

This sparked the possibility that beneath that icy crust could be an ocean. Magnetic field data and further investigation by the Galileo spacecraft in the 1990s seemed to confirm this. And where there is water on Earth, there is life. Could the same be true at Europa? ..."