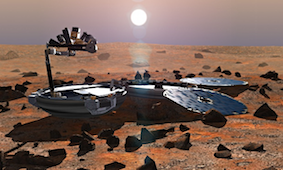 I have a new piece published by the Guardian:

"British Beagle 2 probe had not been seen or heard from since December 2003 and had been presumed destroyed.

So near and yet so far. New images show that the UK’s Beagle 2 successfully landed on the surface of Mars in 2003 but failed to fully deploy its solar panels. Without these, it could not communicate with Earth and scientists lost contact.

The discovery images come from the HiRISE camera on Nasa’s Mars Reconnaissance Orbiter. They show a bright shape that looks like the lander with some of its solar panels deployed. ..."