Northern lights may put on a show over the UK tonight 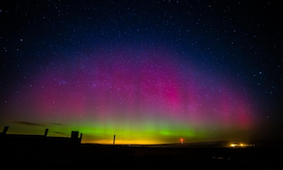 I have a new article published by The Guardian.

"The aurora borealis could be pushed further south than usual by a coronal mass ejection from the sun on Friday.

Skywatchers in northern England, Scotland and Northern Ireland could see a display of the colourful northern lights on Friday and Saturday nights. The aurora borealis will appear as a faint glow or as shifting veils of light in the sky.

“If the skies are clear it will be worth keeping an eye on the northern sky,” said Jim Wild, a space physicist from the University of Lancaster in the UK."