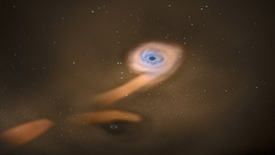 I have a new story posted by ESA:

"A pair of supermassive black holes in orbit around one another have been spotted by XMM-Newton. This is the first time such a pair have been seen in an ordinary galaxy. They were discovered because they ripped apart a star when the space observatory happened to be looking in their direction.