Mars volcano may have been site for life 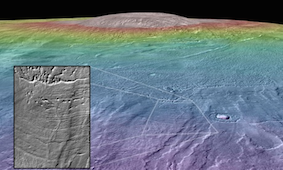 Geological landforms spotted on the flanks of a giant Martian volcano suggest that lakes could have existed there just 210m years ago. In geological terms, this is the recent past. On Earth at that time, the earliest dinosaurs were evolving as part of the late Triassic period.

No one is suggesting that there were dinosaurs on Mars. Instead, the researchers believe that the lakes could have been home to bacteria and other single-celled organisms. ..."