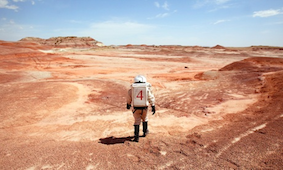 It’s like an interplanetary re-telling of the famous tortoise and hare story. Nasa and the world’s other space agencies are pursuing a careful, long-winded programme aimed at landing astronauts on Mars by 2035. Private organisations, such as the not-for-profit Mars One, are claiming that they can do the same thing by 2025.

This distinct two-speed approach begs questions. Is Nasa being over-cautious? Are the private organisations being reckless? ..."