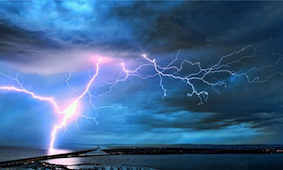 I have a new story published over at The Guardian.
"Streams of particles launched from the sun in the solar wind increase the number of lightning strikes on Earth by 32%

They discovered that when streams of high-speed solar particles strike the Earth's atmosphere, the average number of lightning strikes increased by 32% for more than a month afterwards. The study is the first to implicate the solar wind – the stream of particles launched from the sun at over a million miles per hour – in triggering lightning, a phenomenon that has puzzled scientists.

Previous research had suggested the involvement of cosmic rays, highly energetic particles from deep space. In this scenario, the solar wind should protect Earth because it carries a magnetic field that was expected to deflect the cosmic rays, which would lower the rate of lightning strikes.

The new research shows the opposite effect. ..."