The Guardian: Gravitational waves give Nobel prize committee another headache 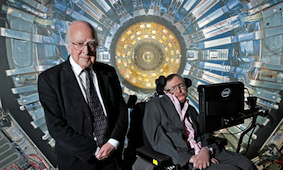 I have a new article published by The Guardian:

If confirmed, the detection by physicists of primordial gravitational waves created in the first moments after the big bang, reported on Monday, will go down in the annals of science as a fundamental breakthrough in our understanding of how the universe began.

A team of American astronomers announced that they had detected the tell-tale signature of "cosmic inflation" using an experiment called Bicep2 – a telescope located under the clear skies of the south pole.

For more than 45 years, inflation has been just a theorist's dream. It is a hypothetical idea used to explain certain characteristics of the universe, in particular why space appears to have more or less the same density of matter everywhere.

The theory postulates that the universe underwent rapid expansion early in its history, doubling its size more than 60 times in the space of less than a second. It is akin to unfolding a crumpled piece of paper. All the wrinkles and defects are smoothed out into a more or less featureless continuum.

If Monday's result proves to be correct then the Nobel committee will almost certainly start reaching for its gongs. So who is in the frame? ..."