Across the Universe: Distant new world may point to undiscovered planets in solar system 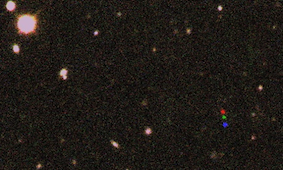 I have a new posting on my Guardian blog:

"Today’s discovery of dwarf planet 2012 VP113 suggests that many planet-sized worlds lurk undetected beyond the orbit of Pluto, maybe even a giant ‘Super Earth’

We learned today that our solar system is larger than we had previously known. A newly discovered, extremely distant dwarf planet with the tentative name of 2012 VP113 was announced. It appears as nothing more than a dot on images but we know a few things about it.

For a start, it is approximately 450km across, which is pretty small by planetary standards and means that it is almost certainly an irregular lump of rock and ice rather than a spherical "world".

We know also that it never comes closer than 80 times the distance of the Earth to the sun. And it’s pink. Honestly, it is. ..."

The most amazing thing about this story is that almost a decade ago, I wrote about the theoretical possibility of these worlds for New Scientist. You can read that story here.