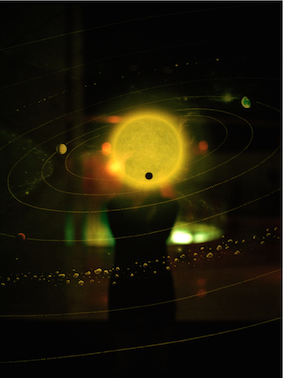 The Measure of Dreams is a short story set before the events of The Sky's Dark Labyrinth. It features Johannes Kepler and his attempt to construct a model of the Universe by turning it into a drinks dispenser. Yes: a drinks dispenser.

Surrounding the short story is an essay exploring the way astronomers love to invent invisible things to explain their observations.

"For a science based on observation, it is remarkable how often astronomy has invented invisible things to get itself out of trouble. Whenever its theories are at odds with reality, a little mathematical snake oil can usually be relied upon to make things slip together more comfortably.

"The snag is that the astronomers then have to say what this invisible mathematical thing is in reality. Perhaps it is an unseen planet tugging at the others to draw them off course, or a sea of particles designed to carry light like waves on an ocean. And once they have decided what the invisible thing is, astronomers then have to invent something that will find some evidence for it. That’s when life becomes really tricky…"

The story is published in Exit Strategies (Arc 2.1: The Journal of the Future, from the makers of New Scientist). It is available as a digital download here.