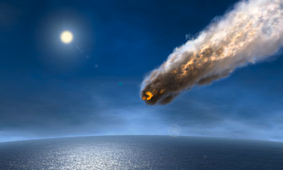 Today's Across the Universe story is:

"Head for the hills (although that won't save you). A number of lurid internet headlines today are heavily hinting at doom in 2032 because a 410-metre-wide asteroid could hit the Earth.
If it does, the reports say, it could create an explosion 50 times greater than the biggest nuclear bomb ever detonated. The unreported details, however, paint a rather different picture.
On 8 October 2013, astronomers at the Crimean Astrophysical Observatory in the Ukraine discovered an asteroid. Catalogued as 2013 TV135, it is just one of 10,332 near-Earth objects known to exist.
Astronomers tracked it over subsequent nights, piecing together its orbit. They realised that it had made a close pass to Earth on 16 September, drawing within 6.7 million kilometres of our planet....."

Read it all on here.