The Guardian: One thousand exoplanets but still no twin for Earth 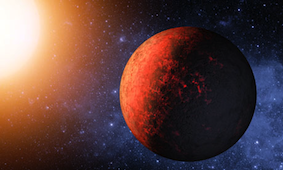 My latest piece for Across the Universe has been posted:

"Any day now, the thousandth exoplanet discovery will be logged, but Earth's twin is not among them. Where are the habitable planets and why can't astronomers find them?

Imagine Earth's twin planet: shining blue with oceans and laced with white clouds. It orbits a star that is virtually indistinguishable from the sun, and is - of course - teeming with alien life.
The problem is that try as they might, astronomers have not been able to find such a world. Even after two decades of searching, an Earth-sized world, in an Earth-like orbit, around a sun-like star eludes us still.
Jean Schneider at the Observatoire de Paris curates The Extrasolar Planet Encyclopaedia, which currently lists 998 exoplanets. He thinks that the focus on Earth's twin distracts from the real goal. "What we are interested in are habitable planets, even if they are not exactly Earth-like," he says.
Yet there are still problems, even after widening the goalposts. The majority of known exoplanets are completely unlike Earth.
They are either too big, or too small, or just too bizarre. Take the case of CoRoT-7b. It is so hot that astronomers theorise it could rain pebbles, which would condense out of the atmosphere in the way water droplets do on Earth..."