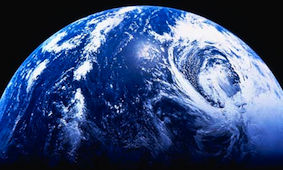 The project has been masterminded by Carolyn Porco, who leads the imaging team on Nasa's Cassini mission to Saturn.

Cassini will acquire a sequence of images of Saturn and its ring system over the course of four hours on Friday. The Earth will be visible near the rings and will be captured as it appears between 22.27 and 22.42 BST (17.27 to 17.42 EDT).

I say "as it appears" because Cassini is 1.44bn kilometres away. Light from Earth takes 80 minutes to reach it. So, although the time to look up and smile is between 22.27 and 22.42 BST, the shutters on Cassini will open 80 minutes later to capture the light as it arrives. Astronomers call this "look-back time".

In the finished image, our entire planet will appear as no more than a pale, blue dot, peeping through Saturn rings.

"Pale blue dot" was the phrase used by Carl Sagan to describe an image of Earth taken in 1990 from even further away. The Voyager 1 spacecraft was 6bn kilometres from us, roughly the distance to Pluto's orbit, when it took pictures of most of the planets in the solar system.

@JohnJossy1957 @sciencefocus @ISUnet You are very welcome - thank you for your message. Sorry I overlooked it at first.