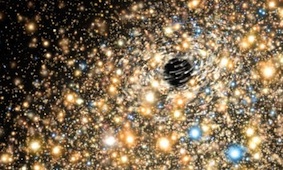 If gas clouds could think, this one would class itself as the luckiest bunch of atoms in the universe. The front portion of a giant gas cloud called G2 has survived a close encounter with the supermassive black hole at the centre of our galaxy.

The huge gravitational forces that have been acting on the cloud have thrown it back into space with a velocity of 10m kilometres per hour. That's about one per cent of the speed of light, the fastest speed through space achievable.

The gas cloud was discovered in 2011 and shown to be on a nearly suicidal orbit that would carry it to within 25bn kilometres of the black hole, which is itself estimated to be about 7bn kilometres across, and contains more than 4m times the mass of the sun.

It is impossible to know what comprised that mass before it was swallowed by the black hole because it has been crushed out of existence and only its combined gravitational impression remains. Common sense would suggest that some of it was once gas clouds, stars and planets.

These new observations, taken by an international team of astronomers using the ESO Very Large Telescope, show that the latest victim has arrived earlier than calculated and that some of it has survived. Not all of it is expected to be that lucky.

G2 has arrived early because the gravity of the black hole has stretched the cloud into a giant string of "spaghetti" that will now take more than 12 months to complete its dangerous passage.

During that time, some of it is bound to stray too close and find its way into the black hole. This will spark a flare of radiation that should tell astronomers something about enigmatic objects known as active galaxies.