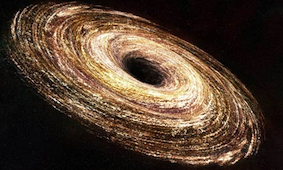 There's a new post on my Guardian blog, Across the Universe.

Black holes contain the keys to a deeper understanding of the universe. So finding 26 in our neighbouring galaxy is a big deal.

Twenty-six new black hole candidates have been discovered in the neighbouring Andromeda galaxy. According to the astronomers involved, these could be just the tip of the iceberg. Details of the find will be published in the 20 June issue of The Astrophysical Journal.

The discoveries are the culmination of 13 years of observation. Researchers used Nasa's Chandra and the European Space Agency's XMM-Newton satellites. Both record the X-ray light emitted by celestial objects.

Black holes are the most mysterious objects in the universe. They are regions of space in which the density of matter has become so great that the gravitational field is overwhelming. They will devour anything that strays too close. Once inside, nothing can escape back into space, not even light.

So, strictly speaking you can't see black holes. You have to infer their presence from X-rays given out as they rip nearby stars to pieces. Hence the reason astronomers refer to these as black hole candidates. Even so, it's big news.