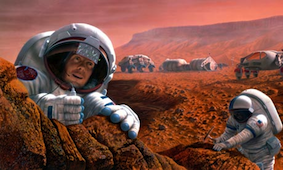 It is time for idealism about missions to Mars to end. Going there with current technology would carry a significant risk of harmful radiation exposure.

This was made clear at last Thursday's teleconference of results from the Radiation Assessment Detector (RAD) onboard Nasa's Curiosity rover.

During the rover's cruise to Mars between December 2011 and July 2012, RAD showed that an astronaut would clock up the same radiation dose in a day that the average American receives in a year. If you exclude medical dosages, it would be 10 times more than the average American.

Taking these numbers at face value, the radiation from a 500-day round-trip to Mars would exceed Nasa's current safety guidelines...

You can read the full article here