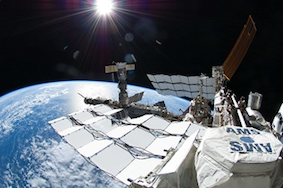 “The first data from the $2bn Alpha Magnetic Spectrometer (AMS) experiment on the International Space Station has confirmed a strange antimatter signal coming from space. However, the experiment has not yet collected enough data to allow scientists to determine the source of this antimatter.