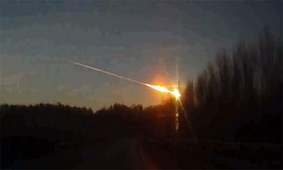 In terms of human casualties, Friday's meteorite strike is the worst ever reported. Almost 1,000 are reported to have sought treatment after the fall. At least 34 of them were hospitalised, with two reported to be in intensive care.

Before this there were only stories of a dog being killed in Egypt by a meteorite in 1911 and a boy being hit, but not seriously injured, by one in Uganda in 1992.

The Russian Academy of Sciences estimate the fireball that streaked over the Ural mountains on Friday morning weighed about 10 tons. The speed of entry was at least 54,000 kilometres per hour (33,000 mph) and it shattered about 30-50 kilometres (18-32 miles) above ground, showering meteorites that caused damage over a wide area. ...”

RT @sciencefocus: Some far-out theories that'll be doing the rounds in 2020, pieced together by the collective brains of @lalakat, @briancl…