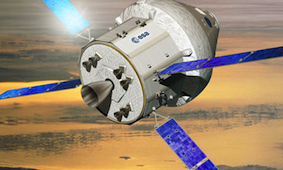 I have a new post over at my Across the Universe for The Guardian.

“The space agencies are about to reveal more about their collaboration to send astronauts beyond Earth's orbit. But will the Orion missions be inspirational enough for their critics?

It is now more than 40 years since a human ventured beyond Earth orbit. The last three astronauts to slip our world's gravitational tethers were those on Apollo 17. They crossed 385,000 kilometres of space to land on the moon and then returned to splashdown in the Pacific on 19 December 1972.

Since then, no human has been higher than about 600 kilometres above Earth's surface. Now it is time to reach out again. ...”

I really enjoyed writing this and learning more about @neo_mapp and the asteroid work at @Airbus - fascinating how… https://t.co/nytPkQGCjL

Still time to register for this tomorrow. Learn about the fantastic @ArielTelescope. Note the time is in CET. I’ll… https://t.co/iu1RQgPkut

RT @Thievesbook: Preparing for the #Perseverance landing on February 18th, here is how today's team at @NASAJPL are standing on the shoulde…