Whatever the Curiosity rover has found, it's not evidence of life on Mars 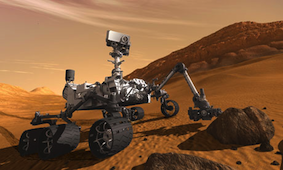 The European Space Agency has agreed to collaborate with Russia on two future missions designed to look for evidence of life on Mars. Meanwhile, Nasa's Curiosity team says it is poised to make a 'historic' announcement.

This is the latest piece for my Across the Universe blog over at The Guardian.

“This week in Naples, Italy, the European Space Agency (Esa) approved Russia as its partner for a brace of Mars missions set for launch in 2016 and 2018. Russia will now step in to fill the gap created when Nasa pulled out of the ExoMars missions in February.

The 2018 ExoMars rover will be the first mission to look for evidence of life on the red planet since Nasa's Viking missions back in the 1970s. But could it have been trumped by Nasa's Curiosity before it even makes it to the launch pad? ...”