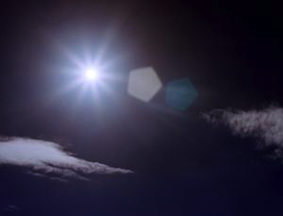 “Nothing is supposed to speed up or slow down radioactive decay. So how come the sun seems to be messing with some of our elements?

IT WAS one of those evenings. You know the kind: after a draining day at work, all you want to do is relax in front of the television. The last thing you expect to do is make a breakthrough that could change the face of modern physics.

Yet that's exactly what happened to Jere Jenkins on 13 December 2006. After a busy day in the lab, he recalls watching the news in a "semi-catatonic" state. The story was about how astronauts had been outside the International Space Station during a solar storm and had caught a blast of X-rays.

Jenkins sat up and took notice. This could be the answer to a puzzle he had stumbled across at work. Results from one of his experiments suggested that the sun was somehow speeding up the radioactive decay of an isotope he was studying - something that was not supposed to happen. The news report gave him an idea about how to test this peculiar finding. If the sun was indeed affecting radioactive half-lives, he wondered, what would happen when a solar storm slammed straight into Earth? He pulled out his laptop, logged into the university server and checked his experiment. What he saw stunned him. ...”

You can read the full story here, a registration is required.

It has generated a couple of interesting responses through my website:

Firstly, here is a paper by Professor John Hardy who has measured the decay rate of gold-198 at seven different Sun-Earth distances. The isotope is a beta-emitter with a half-life of 2.7 days. He observes “no systematic oscillations in half-life”.

Secondly, a reply came from Lewis Larsen of Lattice Energy LLC who believes that Jenkins and Fischbach’s results can be explained with neutrinos if the Widom-Larsen theory is true. Crudely, the Widom-Larsen theory attempts to explain the controversial ‘cold fusion’ experiments of the late 80s/early 90s. Lewis’s technical comment on my New Scientist article can be found here.  A recent, popular discussion of his ideas in general can be found here.