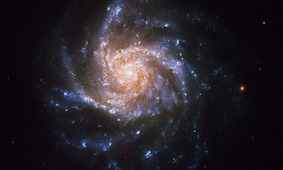 The influence of mysterious 'dark energy' has been mapped far into the distant past of the universe. But it seems dark energy's gain may be dark matter's loss.

My latest piece for my Across the Universe blog over at The Guardian says:

“There is more movement in the universe than astronomers can explain. The galaxies are spinning more quickly than expected, while space itself is expanding at an ever-increasing rate, which is something astronomers thought was simply impossible until they discovered it in the mid-90s.

Clearly, something is missing from our knowledge of the cosmos. Rather than tinker with the gravitational theories of Newton and Einstein to cause more movement from the matter that we know exists, most astronomers prefer to believe that the universe is made up predominantly of invisible matter and energy. ...“