Why Einstein never received a Nobel prize for relativity 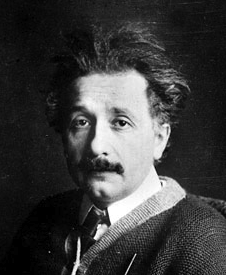 As part of my research for The Day Without Yesterday, the third volume of The Sky's Dark Labyrinth trilogy, I have become fascinated by Einstein's fractious relationship with the Nobel Institute. This week, the 2012 prizes are awarded and it afforded me the opportunity to write about Einstein's Nobel Prize for my Across the Universe blog for The Guardian.

"Nobel prizes often attract controversy, but usually after they have been awarded. Albert Einstein's physics prize was the subject of argument for years before it was even a reality

There was a lot riding on Einstein winning a Nobel prize. Beyond his academic reputation, and that of the Nobel Institute for recognising greatness, the wellbeing of his former wife and their two sons depended upon it.

In the aftermath of the first world war, defeated Germany was being consumed by hyper-inflation. The government was printing more money to pay the war reparations and, as a result, the mark went into freefall against foreign currencies. Living in Berlin, Einstein was naturally affected by the crisis.

He had divorced Mileva in 1919, several years after she had returned to Switzerland with the boys, Hans-Albert and Eduard. As part of the settlement, Einstein pledged any eventual Nobel prize money to her for their upkeep. As the hyper-inflation bit ever deeper, so he needed that cash. ..."