Water on Mars has a long history 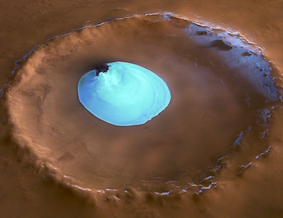 "It was November 1971. The scene at Nasa was a tense one, similar to that of Curiosity's landing back in August. Ground controllers held their collective breath as Mariner 9 approached Mars. If everything went to plan, the spacecraft would make history by being the first manmade object to go into orbit around Earth's neighbouring planet.
Mariner 9 was an octagonal spacecraft just less than a metre and a half across, with four cross-like solar panels sticking out another two metres from its body. Its mission was to map Mars. At the appointed time, the retrorockets fired and Mars' gravity took hold of the spacecraft.

Soon afterwards, data began to flow back to Earth from the cameras. Images built up on the monitor screens line by line but the scientists stared in mounting disappointment. Nothing was visible. The whole planet was engulfed in a dust storm. All the exquisite geology that the spacecraft was meant to see lay buried under a blanket of suspended particles. ..."