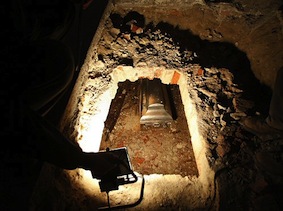 According to the latest reports from Prague, the team responsible for exhuming Tycho Brahe have collected the samples they need and will be reburying the body this afternoon following a special mass.  The crypt was opened in the Church of Our Lady Before Tyn near Prague's Old Town Square on Monday.

Tycho’s remains (below right) are contained in a tin box, as seen here in the crypt. Both pictures come from Ceské Noviny.

The samples are said to be in better condition than the team were expecting.  Tests will begin later this year and the team hope to have a conclusion about Tycho’s cause of death some time next year, maybe as early as spring.  According to history, Tycho died of a bladder infection but the 1901 exhumation indicated higher than usual concentrations of mercury in his body, raising the spectre of poison, either by accident or foul play.

Jens Vellev is a professor of medieval archaeology at Aarhus University, Denmark, and is leading the team of scientists from Denmark and the Czech Republic.  He told The Associated Press that he hopes to establish Brahe's intake of mercury in the last weeks of his life when he was apparently taking medicine that contained mercury to relieve pain.  To do this Vellev will conduct a CT-scan and use an X-ray technique known as PIXE analysis at the Nuclear Research Institute AS in Rez near Prague. 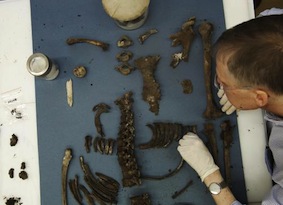 As promised on Monday, here is a second extract from the novel in which German mathematician Johannes Kepler learns a little more about Tycho’s astronomical achievements.

"Morning light fell through the domed skylight as an insect might tumble into a trap.  At the bottom of its fall, it struck a great brass globe that shone as though the smith and his polishing cloth had not one moment ago left the room.  From the globe, the light bounced off to create golden murals around the circular chamber.

At sight of the monument, Kepler’s stifled yawns vanished.  He circled the globe with his mouth parted in awe.  Drilled into the metal were a multitude of small holes around which were etched the figures of the zodiac and other constellations: the twins of Gemini with their backs turned in disdain to Cancer’s nipping pincers; Orion standing proud in the opposite hemisphere to his nemesis, Scorpio.  But it was the dots that truly caught Kepler’s attention.  He reached out to touch them, as if feeling the indentations would make them more real.

Kepler jumped.  Tycho was inching into the lobby.

“Each one drilled into its precise position.  The positions accumulated over decades, measured by my own instruments.  Let no one tell you that I don’t know what to do with my observations.”

Kepler felt his cheeks colour and he turned back to the globe.  “I had once thought to fashion my own contribution to astronomy in metal.”

“I convinced the Duke of Württemberg to commission a model of the universe for his court, based upon my nested arrangement of the perfect solids.”

“Ah, the central premise of your Mysterium.”

Kepler nodded.  His epiphany had occurred in Graz, back in the lofty rooms of the Stiftschule where he taught geometry.  Chalk squeaking on the board one day, Kepler drew a circle, then enclosed it with a triangle so that the midpoints of each straight line just touched the circle.  Finally, he drew a larger circle, its circumference touching each of the triangle’s three points.

“In this arrangement,” he explained to the usual handful of students, “The radius of the outer circle is twice that of the inner circle…”

That was when it hit him so clearly.  It was as if this piece of knowledge had been woven into his soul since the moment of his birth, waiting to be remembered.
According to Copernicus, Saturn lay twice as far from the Sun as Jupiter – exactly the same ratio as the two circles separated by a triangle.  Had God used such geometrical shapes as the invisible scaffolding to hold the planetary spheres in place?  If so, the orbital distances of the other planets could be similarly derived by placing other shapes between them.

It had always struck him as curious that the planets were not uniformly spread throughout space.  This could be the answer.

All summer he set about furious calculation.  At the conclusion of his toil, he discovered that the best arrangement was to use three-dimensional shapes: a cube between Saturn and Jupiter, a three-sided pyramid between Jupiter and Mars, a dodecahedron between Mars and Earth, a twenty-sided icosahedron between Earth and Venus, and finally an octahedron between Venus and Mercury – and all of them centred on the Sun.

Plato had declared these shapes perfect because of the way they were constructed using precise geometrical rules.  And Kepler thought he had found them mirrored in the stars, holding the planets apart.   With his tutor’s begrudging help at Tübingen, Kepler had published a book, Mysterium Cosmographicum, to announce his idea to the world.  Then he set about constructing it in silver and that was when the problems began.

He explained to Tycho, “Different silversmiths would make the various components so that no one would be able to steal the secret of the universe before it was assembled at Court.  Each planetary frame would be hollow and contain a drink to be dispensed through taps at the edges of the model: brandy from Mercury, mead from Venus, strong vermouth from Mars, and a delicious new white wine from Jupiter. I even suggested that Saturn’s cup should be filled with a bad red wine, so that we could ridicule those ignorant of the planet’s bitter qualities.”

The old man slapped his meaty thigh in appreciation. “What happened?”

This was the moment when Kepler regretted starting the story.  “It wouldn’t fit together.  What I thought were trivialities in the computations proved impossible for the craftsmen to interpret.  That’s how I knew I needed more precise measurements to refine my calculations.”

“Did it occur to you that your model did not fit because it was wrong,” Tycho’s voice was almost as patrician as Kepler remembered his tutor’s could become.

“Never.  It is the only arrangement that makes sense of the Holy Trinity.  God in the Sun, Christ in the sphere of the fixed stars and the Holy Spirit spread between the two.”

“So you still believe in the nested shapes?”

Kepler turned away. “I confess my thinking has moved on.  I now believe that the planetary distances may be understood using the laws of musical harmony…”
Out of the corner of his eye, Kepler saw Tycho raise a scraggy eyebrow.

“…The idea dates from the Greeks but no one has pursued it for a thousand years.  As a planet moves through its orbit, so its sphere resonates and makes a note.  Each planet makes a different note and together they form a divine harmony, musically rich and beautiful – for God could scarcely have designed things otherwise.  Do you not agree?”

“You’re speaking to a man who hasn’t taken communion in eighteen years.”

“But you are working to reveal the glory of God.”

“I prefer his indifference.  And perhaps that is the best I can hope for after what I have seen.  I know that the heavens vary their appearance, the very realm that Aristotle claimed to be immutable – I’ve seen it change.  The new star of 1572; I watched it for two years, blazing brightly at me yet as fixed in its position as any of the stars.  It had to be located on that final sphere – the very furthest from Earth – yet who will back me?  No one.  The philosophers still talk of it as being an atmospheric phenomenon of the Earth.

“I will back you.  Together we can remake astronomy.”

“But we differ on whether the Earth or Sun lies at the centre of creation,” said Tycho, as if discussing a triviality, but Kepler could hear the suspicion.

“We can find common ground.”

The two men regarded each other; the only sound between them was Tycho’s laboured breathing.  Eventually, he broke the silence.  “Tell me of your background, Johannes.  Is your father a learned man?”

“My origins are not as noble as yours, Lord Brahe.”

Tycho’s eyes flickered in a curious manner; when he spoke he sounded gruff.  “Nevertheless, I am interested.”

Kepler scrutinised the globe, shuffling so that its great bulk was between him and Tycho.  “I was born in Weil de Staadt.  My mother is a herbalist and my father, well my father was a soldier.”

Kepler’s insides squirmed at that word – soldier – it meant only one thing: mercenary.

“My mother, yes.  My father, no.”  The sentence was only half correct. Aged seventeen, Kepler had watched from the shadow of a magnolia bush as the man swaggered down the street, swigging from a flagon, letting the townsfolk know that he was off to war.  It was soon afterwards that Kepler discovered his father had once fought a Protestant uprising in Holland, despite his own Lutheran roots.  The realisation was sufficiently painful even now to flush Kepler with shame.
That departure was Kepler’s last memory of his father.  When the months turned into years, so the family gave up waiting.  Yet it was only recently that Kepler himself had stopped snatching a second look at any grizzled face that passed, just in case there was a resemblance.

His thoughts were drawn back by the sound of Tycho taking a deep breath.  “I have to decide what to do with you.”

“What task of calculation do I set you?”

Kepler turned at once.  The Master was watching him carefully.  “Mars perhaps; Longomontanus has done more than any man alive, yet he is mired.  What if I were to ask you to work with him on it?  I think that might suit you, would I be right?”

A shiver passed through Kepler.  Did Tycho know of his conversation with Longomontanus?  He spoke carefully.  “I will not disappoint you.  I will have its orbit in eight days.”

Tycho cocked his head.  “Will you now?”

“Eight days, sir, or I am not the greatest mathematical astronomer to live.”

“I once thought that I was the greatest mathematician, too.  You know what I got for it?”

“This.”  Tycho raised a finger and pointed at the metal nugget in his nose.  “I fought a duel because a classmate dared to claim superiority with numbers over me.  I knew he was more gifted but I couldn’t admit it.  And that sliver of truth allowed his blade to slip through.  The constant ache of this wretched thing is my reminder of the cost of misplaced pride.”

“We are a family here, Johannes.  We work together.”

“I understand.”  But as he hurried away, Kepler’s thoughts were full only of the discoveries he was soon to make. ..."

The Sky’s Dark Labyrinth will be published in April 2011 in the UK by Polygon Books.

@cpl43uk @AstronomyNow @Dr_Lucie Thank you Chris, that’s so kind of you. And in return, you gave a truly great talk… https://t.co/t0MSXolvfa