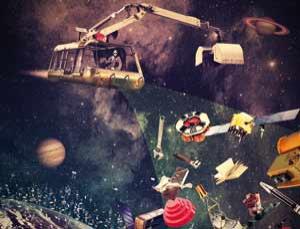 I have a new feature published in New Scientist:

“EARTH'S rings have never looked so beautiful, you think as you look up at the pallid sliver of light arcing through the night sky. Yet unlike Saturn's magnificent bands of dust and rubble, Earth's halo is one of our own making. It is nothing but space junk, smashed-up debris from thousands of satellites that once monitored our climate, beamed down TV programmes and helped us find our way around.

This scenario is every space engineer's nightmare. It is known as the Kessler syndrome after Donald Kessler,  formerly at NASA's Johnson Space Center in Houston, Texas. Back in 1978, he and colleague Burton Cour-Palais proposed that as the number of satellites rose, so would the risk of accidental collisions. Such disasters would create large clouds of shrapnel, making further collisions with other satellites more likely and sparking a chain reaction that would swiftly surround the Earth with belts of debris. Orbits would become so clogged as to be unusable and eventually our access to space would be completely blocked.

Read the full story here (a subscription may be required).

RT @EuroGeosciences: A @NASA mission to visit an iron and nickel rich #asteroid in 2026 passed a major design review milestone this week, r…

@ZantippySkiphop @FaberBooks Thank you so much for your interest. Here it is in the UK: Beneath the Night: How the… https://t.co/yOnWPyNs0u

@WhiteRhinoTea It was indeed, my friend. I so look forward to getting together again when we have beaten the virus. Stay safe Chris!

@LazuliBand Sad news indeed. Farewell Ged, may you be happy. We will miss you. Best wishes to all in the band - loo… https://t.co/7Z4uC8GzhA